May 21, 2021, Guilford, Conn.,-  The East Coast Elite League (ECEL) is happy to announce that current member Seattle Jr. Thunderbirds are adding a U14 team to our league starting next season in the fall.

ECEL President Peter Alden is excited about extending the partnership with the Jr. Thunderbirds. “I’m excited about extending our partnership with Seattle,” said Alden. “The Jr. Thunderbirds have been great members of our league since they joined in 2019. I think coming out east allows the Jr. Thunderbirds to get exposure for their players in the Northeast, which is one of the hottest hockey hotbeds in the country for college hockey. Our strategic location in New England allows the Jr. Thunderbirds to get exposure to 61 Division 1 and 3 programs within a 300-mile area of Boston. From talking with coaches in our league that aren’t in the hockey hotbed of Northeast, they love the exposure that the league gives its players to prep schools and colleges in Hockey East, ECAC, Atlantic Hockey, NESCAC, and other college programs across New England.”

Seattle Jr. Thunderbirds U14 coach Kris Wilson is excited about the prospect of joining the ECEL at the U14 level this season. “We want to give our kids the maximum exposure to one of the hottest hockey hotbeds in the United States in New England and any other hockey hotbed in North America,” said Wilson. “Our U16’s spoke highly of the league after they competed in the league during the 2019-2020 season. As a result of that experience, we wanted to give our U14's the same experience that the U16's had in the ECEL. Another thing that we want to do is get our kids exposed to prep schools in the area, which can help set up our kids down the road for success.”

The ECEL will start next season on Labor Day weekend this fall in the great state of Conn., with the games taking place from Sept., 2-6. Then the second ECEL weekend will be on Thanksgiving weekend Nov., 26-29, back in Conn., and then we head up to N.H. in January on the weekend of Jan., 6-9 for our Winter Classic. Then we wrap our league season during President’s Day Weekend, from Feb., 17-20, where our playoffs will happen, and the winner gets the ECEL Cup.

We look forward to seeing what the U14 Jr. Thunderbirds can accomplish at the U14 level next season. They look to capture the program's first ECEL Cup next fall. To find out more about the Jr. Thunderbirds program, you can click here.

For the latest news about the ECEL, you can follow us on all of our social media pages and by going to our website for the latest information.

Founded in 2013, the East Coast Elite League is a four-weekend showcase series that will provide maximum exposure for its member organizations and their players by playing in top venues in ideal scouting locations. Spread across the U15, U16, U18 divisions, and the newly created U14 division and represented by several of the top hockey organizations across the country. The ECEL is the premier showcase series in the United States, unmatched in its format and exposure opportunities. For more information on the ECEL, log on to our website or follow us on Twitter and Instagram. 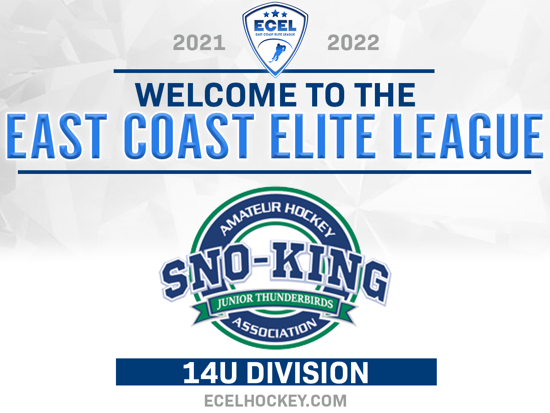 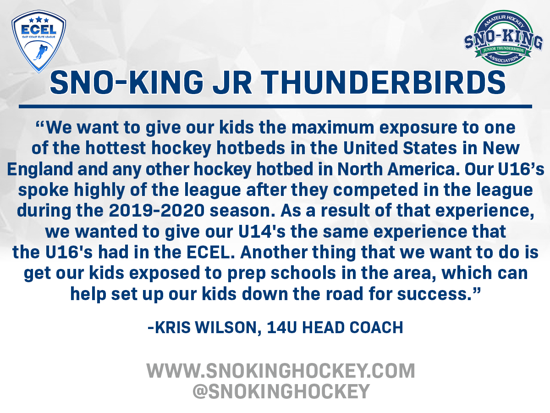