The ECEL would like to extend congratulations to Matt Quercia of the New Hampshire Monarchs for committing to Boston University!  Quercia played this season for the Monarchs 16U team. A veteran , second year player and captain, he helped lead them to a Runner Up Finish in the ECEL. After their season concluded, he was called up to the EHL Junior team where he helped them win an EHL Premier Division championship.

Quercia, a longtime Junior Monarchs player had this to say: "Playing for the New Hampshire Junior Monarchs had to be some of the best years of my life. Playing from Peewees to Midgets to Premier was a huge help for my hockey career. From Coach Kevin Mcguire, to Coaches Justin Soryal and Kevin Purdy, to Ryan Frew and others. It was a great run that led me to my dream school, Boston University. They supported me through it all and I couldn't thank them enough."

"A big heart-filled congrats goes out to him and his family. Monarchs country is extremely proud!" - Monarchs representative Jeremy Vega 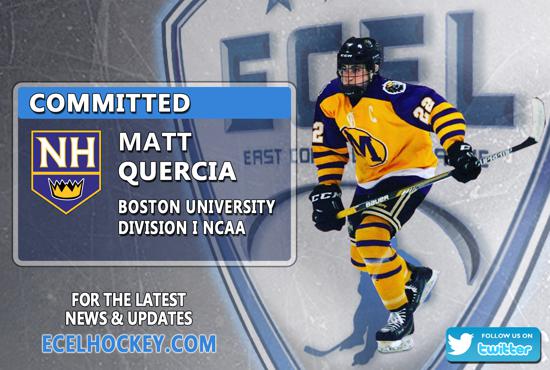