Forward – Jack Ring, Boston Advantage
The Advantage forward racked up a division-leading 10 points, scoring in every game except a 1-0 loss to the undefeated New Jersey Titans. More than half of Ring’s points total came in a 1-goal, 5-assist performance during a 7-2 victory over the 95 Giants. Following the shutout loss to the Titans, he scored twice in another 7-2 win, this time over the Elite Hockey Program, before adding a goal and assist in a 3-0 blanking of the California Jr. Reign.

Defenseman – Dominick Molfetto, New Jersey Titans
Molfetto commanded the blue line for the lone unbeaten U18 squad, as the Titans allowed just 2 goals against in three games, which included back-to-back shutout victories over Boston Advantage (1-0) and Hill Academy (2-0). The New Jersey defenseman also contributed to the offense with a goal and assist in a 6-2 win over the Elite Hockey Program.

Goaltender – Tanner Rusnik, East Coast Spartans
The East Coast goalie posted a 2-0-0 record in his two Fall Classic starts, allowing just a single goal in both outings. Rusnik stopped 25 of 26 shots during a 3-1 win over the Colorado Rampage before turning aside 28 Seacoast Spartan attempts in a 4-1 victory. His .964 save percentage is tops among U18 goalies with multiple ECEL appearances.

Forward – Cy LeClerc, Seacoast Spartans
The Spartans forward gave as much as he got, leading the division in both goals scored and assists dished out with 6 each for a Fall Classic-best 12 points. LeClerc posted a hat trick with an assist in a 4-0 win over Mount Academy following a four-point opening performance in a rout of the West Coast Renegades. He also netted both his club’s goals in a 3-2 overtime loss to the New Jersey Devils, the lone blemish on a three-win weekend for the Spartans.

Defenseman – Alex Gagne, New Hampshire Avalanche
The New Hampshire blueliner posted a point in three of four games, helping the Avalanche average less than 3 goals against for the Fall Classic with his outstanding play in the defensive zone. Gagne recorded two of his four assists in a 4-2 win over the West Coast Renegades. The Granite Staters missed out on a .500 weekend after a tough 1-0 overtime loss to the New Jersey Devils.

Goaltender – Brett Cleaves, New Jersey Devils
The Devils netminder won both games he started in overtime thanks to a stingy .946 save percentage. Cleaves turned aside 20 shots in his first outing against the New Hampshire Avalanche to earn a 1-0 OT victory before helping deliver the Seacoast Spartans’ lone loss of the Fall Classic with a 17-save effort during a 3-2 overtime win. His 0.94 goals-against average is the lowest for U16 goalies with more than one ECEL start.

Forward – Tucker Thornstad, West Coast Renegades
The Renegades forward’s production came in bunches and resulted in both his club’s Fall Classic victories. Thornstad found the back of the net once coupled with 4 assists, factoring in all of West Coast’s goals in a 5-4 win over the Troy-Albany Titans. That offensive outburst preceded his hat trick performance during a 3-2 squeaker of a victory over the Boston Advantage. Thornstad’s 8 points sit him atop the division scoring ranks.

Defenseman – Yater Henry, New Jersey Titans
Henry owns a current three-game point streak with 4 assists after helping lead the undefeated Titans to four straight victories in which New Jersey surrendered only 5 goals. The blueliner posted 2 assists in a 5-2 win over Troy-Albany in between setting up tallies in slim one-goal victories over the Boston Advantage (3-2) and 95 Giants (2-1).

Goaltender – Matthew Choi, 95 Giants
The Giants backstop posted a stellar .958 save percentage over three starts, leading his squad to two straight victories before falling to the New Jersey Titans in a tight-checking 2-1 affair. Choi allowed only 3 goals during his three outings, including turning in a 27-save gem in a 3-0 shutout win over the Elite Hockey Program. 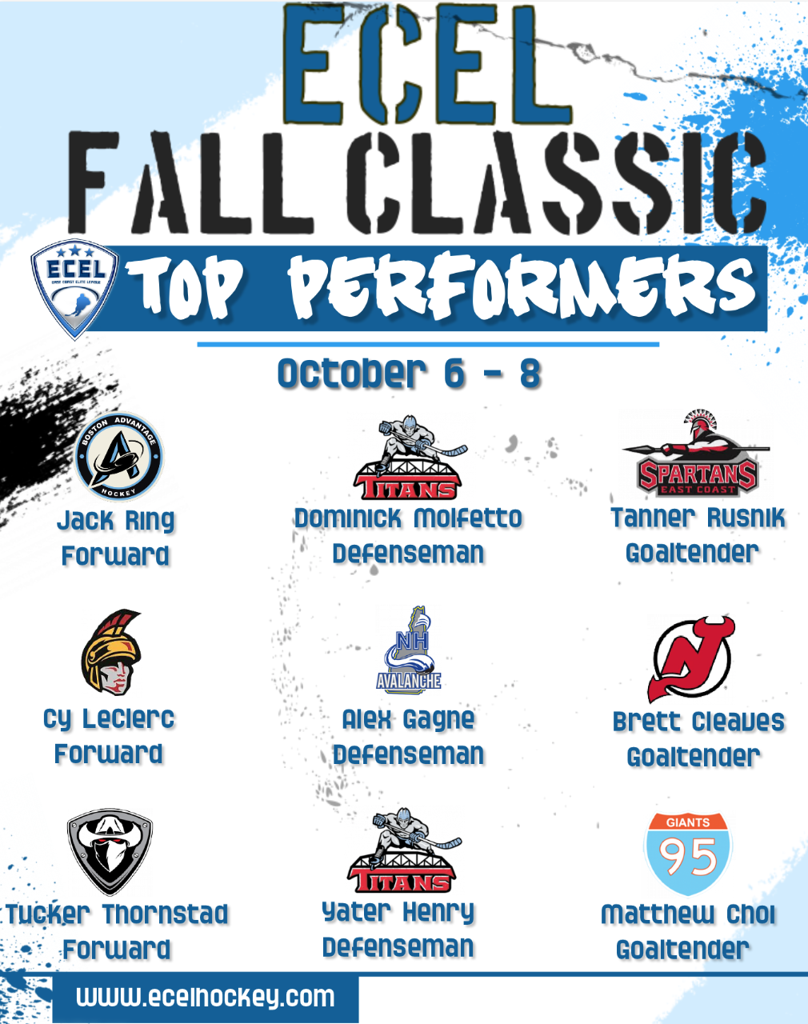